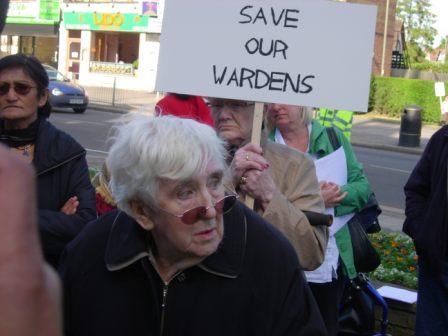 On 8th June Barnet Cabinet Committee agreed a proposal which marked the end of on site wardens in favour of a floating support service operating from possibly three hubs around Barnet.

Having commissioned ‘floating support’ for some of my clients when working as a social worker I am familiar with the merits of a ‘floating support’.  I have worked in social care for over 20 years and come from the advocacy approach to social work. Working with service users to feel empowered enough to start taking control of their lives for me is fundamental to anyone working on social care. The last few years has seen the emergence of the Personalisation agenda, placing the service users at the centre, handing back the power and letting them decide on what services they want. Sounds great in theory and if it works and enables just one service users enjoy a greater quality of life then it is worth it.

But what if a service user chooses a service which the organisation in this case the Council does not want?

In the case of Barnet and a number of other Councils up and down the service users choosing on site sheltered wardens have been overturned by the financial imperative of the Council to make savings. Some will argue that disbanding the service is going to improve services to more residents and this maybe the case, but then we have to be honest with our service users. Perhaps the message on Personalisation should be ‘Choice, but with qualifications.’

I am not convinced that we don’t need on site wardens as part of a range of services on offer to residents. It is my belief, which is shared by others that simply having a warden on site enables residents to maintain their independence.

In Barnet, I think there has been a conflation of issues such as need, the criteria for automatic right to sheltered housing when you reach a certain age, and funding. It did not help that the deletion of on site sheltered housing was announced as a budget saving proposal rather than a review of service provision.

What has happened since the Budget proposal has been a remarkable story of a large group of Barnet residents organising together to oppose the proposal. They have turned up in wheelchairs, Zimmer frames, walking sticks on a local march and several lobbies, culminating in huge rally (200+) of Barnet Councils Cabinet Committee on 8th June.

Whilst the Cabinet decision to replace the schemes has been made, the campaign continues. The residents have enlisted the support of a solicitor  who is seeking a judicial review.

It is clear from the work of Sheltered Housing UK that this issue is not going away and the options for residents should include on site sheltered wardens.

Sometimes in my trade union role you come across groups of staff who are exhausted, demoralised and frightened and unable to find any energy to fight what at times seems an impossible fight. I am reminded of a comment David Cameron said earlier this year about residents feeling disempowered about decisions being made by politicians.

So it is great to see that our senior citizens are showing all of us that you have to stand up for things you believe in. Nothing is for free, some times you have to say no and do something about it.

Next week residents are going to protest in at 12.30 pm on the 22 July I wish them good luck and message of support from Barnet UNISON.