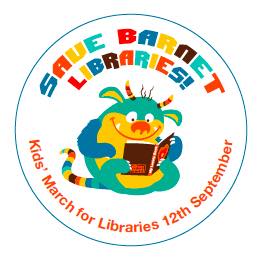 On September 21st the Council will vote whether to accept one of three options for the future of Barnet Libraries. This will be an important decision for Barnet as libraries promote literacy and learning for all, provide access to information and enable people to engage as citizens in their local and wider communities.  But this vital contribution is threatened as the Council’s proposals appear to have been designed not to safeguard our libraries but to wreck them.

The Council’s proposals include;

• Library staffing budget to be cut by up to 68%. It likely that even staffed libraries will not have enough workers available to maintain a sufficient level of service.

• Two or six Libraries to close

• Most remaining Libraries to be reduced in size. They could no longer house adequate book collections, or a sufficient number of computers for the public to use.  There will not be enough study space to meet the needs of students.

• Libraries will be privatised or run by a “Mutual”. There will be no guarantee they will be run for public good and not for profit.

• Libraries will be unstaffed for two thirds of their opening times.   Library users will have to rely on self-service machines and volunteers (if any can be found) for help. As a result of not having staff on site, children will be denied entry to the libraries for most of the day.

Adoption of any of the current options will be an act of vandalism, resulting in Barnet Libraries no longer being an inclusive, efficient and loved public service, as the accessibility and quality of the service will suffer.

This destructive plan has seen the emergence of a Save Barnet Libraries campaign which is made up of Barnet UNISON, residents and Library users.

Our next action is the Kids4Libraries march on the 12th September. More details can be found here

UNISON Branch Secretary John Burgess said: The current proposals would in effect have meant the end of a comprehensive public library service for the residents of Barnet. It is impossible to view these disgraceful proposals in isolation from what is going on across Council services across the UK. Councils have had their government funding cut by 40% since 2010, which is a deliberate attack on local democracy and public services. Our march is attempting to raise awareness within our community and wider afield of what is at stake. Our message to the Council is think again, Libraries are beacons within our communities which must be allowed to flourish.

Barnet Council – Why is this happening to us?