What is going on down Barnet Council Mill Depot? 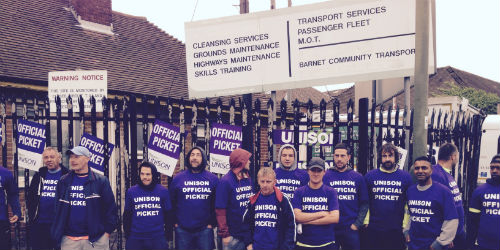 “It will be impossible to complete the work in my allotted time as a consequence of having to drive all the way to and from Harrow depot. What this could mean is an increased likelihood of Waste & Recycling left uncollected. Whoever thought selling our depot without finding another suitable depot within the borough, clearly knows nothing about Waste & Recycling services. It will be a disaster for residents and a nightmare for the staff and at what cost to the council tax payer?”

What are Street Scene services?

Over the past several months our local reps and the UNISON branch office have been bombarded by members complaining about the re-location proposals for Street Scene services.

Several years ago, Barnet Council signed up to an agreement to sell Mill Hill depot, which is situated in the heart of the London Borough of Barnet, without securing an alternative site within the borough to continue to deliver high–profile frontline services. Pinkham Way, in the east of the borough, was an unconfirmed alternative site at the time of the sale, but it was quickly apparent that this location was unlikely to succeed as a result of the effective Pinkham Way Alliance campaign.

It has now been several years since this option was ruled out.

In February this year I, along with all Street Scene staff, were presented with a scenario for the future of the depot that beggared belief.

We were informed the new depot (yet to be built) in Abbots Road, near North London Business Park, was not big enough and so the Council was going to have to run services out of Harrow Council depot. Furthermore there was no room for Transport Services (they provide ambulance service transport and coach escorts for children and adults with disabilities) so they are going to operate temporarily from NLBP at what extra cost? I wasn’t clear, and I think neither were Parks and Open Spaces together with Street Cleansing, where they would operate from.

We currently have a team of ‘Fitters’ who were outsourced then brought back in-house a couple of years ago. They repair all our vehicles but now this service, which was based in a central location, is going to have to be a mobile service. To those looking at this exercise on paper, it may not sound like a problem, but for those who actually do the job every day this proposal looks like it is going to hinder efficiency both operational and financial.

The services operating out of Mill Hill Deport are high profile frontline service, so why would it make sense to move to multiple depot locations, one of which is out of the borough.

My only conclusion is that we are in this situation because the ‘Depot re-location’ was not given sufficient strategic importance while the resources of the Council were busy with implementing mass outsourcing of Council services (24 services have now been outsourced in the last four years). Another key factor is the replacement of senior managers with interim managers/consultants across the Council who then quickly leave after their outsourcing project has finished.

In addition, a number of senior managers in Street Scene have left and as from February this year The Barnet Group was given line management of a couple of consultants tasked with running Street Scene Services, managing the re-location of the depot and the outsourcing project.

In February staff and trade unions were told that things would be different, consultation with the trade unions and staff over the outsourcing models would begin.

It is important to note the outsourcing project is being asked to select an outsourcing option which will have to deliver £5million pounds of cuts.

It is 3 August and the staff / trade union engagement is only now about to start, after five months of wasted time. There was a ‘post-it note’ consultation/exchange of ideas meeting with staff last week and just a promise of a detailed plan of engagement to begin shortly.

Our members are rightly concerned about the implications of the whole Street Scene Service being dismantled and pushed to multiple sites within the borough of Barnet and the Harrow depot.

We won’t back down – Barnet UNISON members