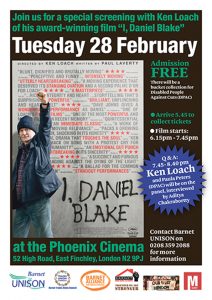 FOR IMMEDIATE RELEASE: Special screening of BAFTA winning ‘I, Daniel Blake’ with a Q & A Ken Loach. 28 February 2017

‘Hunger is being used as a weapon,’ says veteran director, calling for public rage over situation he says is worse than when he made Cathy Come Home in 1966” (Ken Loach)

“After the 2016 Budget, the Office for Budget Responsibility found that, ‘the government is on track by 2020-21 to spend the lowest amount on welfare, as a percentage of GDP, in 30 years.’ Source: BBC

Barnet UNISON branch is proud to be able to host this special event which is being supported by the following community campaigns: Barnet Trades Council, Barnet Alliance for Public Services, Housing Action Barnet, Our West Hendon campaign, Barnet Momentum.

“This film is quite rightly being recognised as a urgent wake up call for all of us. Austerity has delivered brutal cuts to our much loved public services and is hastening the break-up of the NHS. Some political commentators pedal the view that employment is up, but at the same time they conveniently neglect to mention that employment rights are being destroyed through the casualisation of the workforce such a zero hours contracts, and home carers are often not paid for travelling time to clients. I hope all of our members and Barnet residents find time to watch this film. We need everyone to get active in their communities and join the call for the end of Austerity.” John Burgess Branch Secretary Barnet UNISON.

The film is being screened at the iconic community Phoenix Cinema in East Finchley on Tuesday 28 February 2017. A  short Q & A will take place with Ken Loach and Paula Peters from DPAC interviewed by Aditya Chakrabortty, the senior economics commentator for the Guardian.