On Friday 26th March delegates from Barnet UNISON branch will attend the London Region Local Government AGM.  The branch executive passed the following motion and submitted it to the AGM. Branch delegates are going to speak to the motion and look to build a regionwide response to the massive attacks to the FE sector

Our AGM promotion video – why we need you to attend! 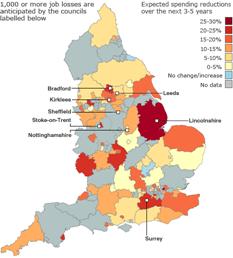 I was re-reading the Transact Report again……and noticed the following comments on school catering…….which said “most local authorities do not provide an in-house school catering service”

Now as someone who has always asked questions…..I really need to see some evidence for statements like this. In July 2009 the Trade Unions submitted a report to Future Shape Cabinet Committee with a number of questions in particular about the Transact Group.

I have to say trying to find out what the group was actually doing and who was doing the doing has felt like being in a Dan Brown novel!

However, 11 months after asking for the Transact report it finally appeared in my in box…….I took a deep breath and opened the report……..had I finally got my hands on the Future Shape Da Vinci Code?……would  I finally understand the mysteries of easyCouncil? ….would I hear a choir of angels singing in my ear…………?

Does this report, justify the local press story or this interview with Vanessa Feltz on BBC London earlier this week.

UNISON is supporting a nation-wide coalition of organisations to begin an unprecedented mobilisation of pension fund members and the public to petition their pension funds in support of oil sands resolutions due to be voted on at the BP and Shell AGMs this Spring. The UNISON staff pension fund has co-filed resolutions to the Shell and BP AGM’s.

For LGPS members add your voice click on the link http://fairpensions.org.uk/unison/tarsands–

put the name of your employer in the search box – follow instructions and it will send an automated email to your fund administrator. It only takes two clicks of a mouse from your computer!

“The bankers messed up the economy of most countries around the world. The solution appears the same – cut the public sector – Here are a few examples.”

Germany.-  for Public-sector workers get a 1.2 per cent pay rise backdated to January 2010

Germany’s 2 million public-sector workers will get a pay rise this year that is only slightly above the level of inflation, another sign that German unions are willing to be flexible to protect jobs.

Verdi, the services union, wanted a 5 per cent pay increase for workers employed by central government and towns but accepted a proposal for Public-sector workers are to get a 1.2 per cent pay rise backdated to January 2010, and then a 0.6 per cent rise at the start of 2011. A further 0.5 per cent rise in August 2011 a 2.3 per cent rise over 26 months.

Thomas Boehle, head of the municipalities’ employers’ (local authorities)  said the deal would cost towns €1.1bn this year and another €1.3bn in 2011. “The situation of municipal budgets is as bad as never before,” he warned. sound familiar?

He gave notice of strike action “of indefinite or limited duration” and a four-week ban on overtime from  15th March. It has also threatened to immediately place pickets on any location if a member is removed from the payroll. This is against a 5pc pay cut inflicted on members earning in the main less than €30,000. CPSU assistant general secretary Theresa Dwyer said the approach showed the sense of outrage among workers. “Further combined and more disruptive action now seems inevitable,”.

Public sector workers in have all ready taken part in a national one day strike in protest s against the measures proposed to address the financial cricis casued by the bankers. The proposals include cuts in public sector pay and bonuses, and a freeze on hiring new employees and increasing the average retirement age from 61 to 63.

Public-sector workers have Held a 24-hour strike in Portugal in the latest protest Trade unions representing more than 500,000 civil servants have joined forces for the first time in four years in a protest against a planned pay freeze, indirect tax increases and cuts in bonuses and pension benefits.

Portugal’s unions said that their members had suffered worsening conditions for years as public pensions and other benefits were cut by the minority Socialist government, which this year froze public-sector wages ..

Unions  say that public sector workers bear the brunt of belt-tightening every time the government overspends, pointing out that public-sector workers have suffered real wage cuts of up to 7 per cent since 1999.

The government has said it will present further cost-cutting measures later this month. It also plans to cut the amounts paid to civil servants who take early retirement.

“Sack the expensive consultants, listen to your workforce, and we can work together to defend and improve public services.”

“Are consultants working for the Daleks?” 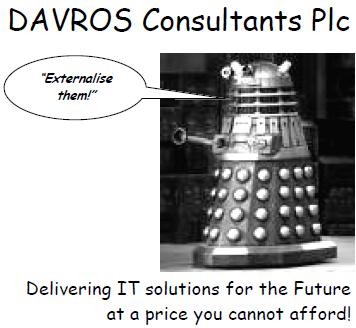 Hundreds of reports here and here and here on the failure of the private sector along with £££££Millions of public money wasted on consultants.

When are we going to listen to staff, often referred to as ‘our biggest resource’

or perhaps we should ask the ‘Doctor’?

“EasyCouncil or John Lewis – Are You Being Served?”

You report that our employers, Tory Barnet Council and Labour Lambeth are to be rival flagships in a battle between “EasyCouncil” and the “John Lewis local authority” (The future for local authorities: is it John Lewis or easyCouncil?” 18 February).

Setting aside the spin-doctors’ soundbites, Tony Travers describes this in your pages as “an ideological war fought by proxy” – will local government jobs and services be the “collateral damage” in this ideological war?

UNISON has made clear our reservations about the Tory “EasyCouncil” model – the judgment of the court, which you report, that Barnet could not lawfully remove sheltered housing wardens reinforces our concern that the Council is rushing to give up its responsibilities to the vulnerable.

Robert Booth is also right to report that behind the “EasyCouncil” gloss much of what is being proposed in Barnet is simply “old fashioned privatisation” – and as you have also recently reported, the Audit Commission has cast doubt on whether local authorities really manage to get value for money from the outsourcing that is now endemic across the public sector (Boom times for outsourcing firms as public sector cuts bite, 17 February).

If “EasyCouncil” seems to offer little to our members, the ideas behind Lambeth’s co-operative “John Lewis” model might have more to offer the workforce and local people if it became a means to unlock the enthusiasm and imagination of the multi-skilled multi-talented local government workforce – and engage with the local community about what they want from public services.

However, alarm bells ring for trade unionists when Council Leader Steve Reed, advocates, as you report “handing over some of the council’s more simple tasks to the voters to sort out for themselves.” There is a danger that this could lead to the same attempts to offload responsibility which we see in Barnet.

Similarly, the suggestion that local primary schools should become mutually owned organisations echoes the experimentation with forms of ownership which has fragmented public service provision and is one of the most poisonous elements of New Labour’s legacy.

You report correctly that Lambeth already has more tenant-run estates than any other borough – but do not mention the problems which have led to the closure and enforced merger of some tenant managed organisations in the borough.

You report further that Greenwich Leisure Ltd, which runs Lambeth’s leisure management contract is “employee-owned” – but not that it is currently making redundancies affecting many of its workers in the borough.

Mutualism and cooperation are, of course, a strong part of the history and ethos of the trade unions – but so is a strong commitment to the public provision of public services.

You report Tessa Jowell stating that “the mutual movement is one that will be grassroots-led, not Whitehall-imposed” – in that case we expect options to improve public services within the public sector to be given full and fair consideration.

We want to encourage our members – in Barnet as much as in Lambeth – to engage with plans to improve public service provision. But we will also be prepared to resist cutbacks in, or privatisation of, essential services.

Our message to Council Leaders – Tory or Labour – is clear. Sack the expensive consultants and listen to your workforce and we can work together to defend and improve public services.