RE: Future of Public Services in the London Borough of Barnet and throughout the UK

I am writing to you on behalf of my members working for Barnet Council in response to ‘financial Armageddon scenario’ not just for local government but for all public services over the next four years irrespective whether it is a Labour or Conservative Government.

Last June, our Council began a consultation with staff and other public sector bodies in our borough entitled ‘Future Shape’ just before the financial meltdown devastated economies globally.

Catching up with UNISON reps 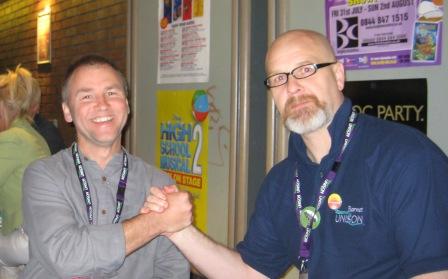 It is always good to listen & learn from other UNISON reps. I always come away from Conference having learnt something. It was good to meet up with UNISON NEC rep John McDermott from . I first met John at Conference several years ago. John is a fantastic, hard working committed rep, someone I would be proud to work with and someone any UNISON member would want fighting in their corner. John was always supportive to the Fremantle Care Workers Campaign; John recently got the most votes in the for the male seat NEC elections in his region.

Keep up the good work John.

Council meetings this week and next

The committee are to receive an interim update on the investigation. In the backdrop of the latest farce with MP expenses being blacked out lets hope promises of transparency and openness are continued here in Barnet.

One for the anoraks……I think we need to pay closer attention to these reports…I am very interested in the Meals at Home Audit. This service was privatised over a year ago and has not been performing well. Unfortunately the Trade Unions were not consulted until it was too late. When we found out we tried to convince the Council to look again. We were concerned that the business case had not been robust & contract monitoring not in place. http://committeepapers.barnet.gov.uk/democracy/meetings/meetingdetail.asp?meetingID=4554

Less than 14 days before we read the Future Shape Cabinet report!

Everyone keeps asking me if I know what is going to be in the report.

“I don’t know, as I have reported before, I don’t know what is in store for Public Services in Barnet.”

It won’t be long before the report will be on the Councils internet, hopefully the week commencing 29 June.

Proud to be part of UNISON London region.

But it was the Croydon branch that I want to give a BIG mention. Just over two months ago Malcolm Campbell their Branch Secretary and my good friend passed away. Malcolm was a fantastic branch secretary,the branch are still missing him badly, as all of his friends are. Malcolm would have been proud of the Croydon’s delegation which went to conference. They kept up his tradition of speaking up for members and challenging the bureaucracy that sometimes seems out of synch with the delegates at conference.

“Are you going to vote for cuts/redundancies/dismantling of your Pension Scheme?” 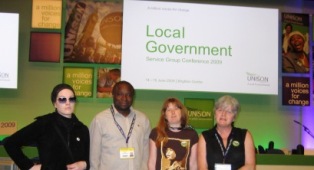 It was a busy week at both Local Government and National Delegate Conference.It is always good to see how other UNISON branches are coping with the challenges facing public services.

Barnet is still one of a few Councils looking at something as big as Future Shape. But the clear message from branches and national UNISON officers was that we are entering into unchartered waters. Future budget forecasts for ALL Public Services are not looking good.

Whilst it is good the Council needs to demonstrate to our residents that they are getting value for money. I don’t think it acceptable we just shake our heads an accept it. Politicians from all parties have to re-think what they are going to offer us the electorate next May.

“Why would we vote for redundancy and the dismantling of our Pensions?”

That is all they are offering at the moment.

I think sometime in the next 11 months we are going to be asked a question. I hope we all agree that cuts/redundancies/Pensions Scheme dismantled is not what UNISON members would vote for.

Make sure you make plans to spend a few hours on Monday 6 July to attend the lobby of the Future Shape Cabinet Committee.

Barnet UNISON – Round up of the Council meetings this week

On Monday there was a fantastic turn out for the Cabinet Committee meeting. Over 300 residents largely residents or relatives of people using the Sheltered Housing Service turned up to protest then listen to the debate concerning their future.

Media were there in numbers, local press BBC London, LBC radio and a Panorama film crew!

I agree with the Deputy Chief Executive who in this week’s First team said “……public question time took up the first half hour of the meeting. Strong passions were firmly articulated.”

As Max Boyce used to say ….I was there! But I don’t think that it is fair to describe what is happening with this campaign as simply residents opposed to change. I have long memory and can remember Councillors being rushed into decisions about our residential and day care services for older people against UNISON advice. The same arguments about progress and no change is not an option were used to undermine UNISON’s report to the Council. Needless to say UNISON was right to urge caution, we are currently being taken to court by the Provider who took over our council services. Furthermore we have a ludicrous situation two tier standard, with some Barnet residents in the former council residential homes still living in what was described back in 1999 as unsuitable and other residents in the new homes, all on the same contract. How clever is that?

Back to Sheltered Housing, it is clear residents are scared and are not convinced that this cut will lead to a better service. A lot of work is needed to address these concerns.

This is a cross party committee specifically to look at what happened to the Councils investment in Icelandic banks. The purpose of this meeting was to select a firm of consultants to carry out an investigation.

A robust discussion was had. There was cross party consensus for the need for transparency. They are working to a tight timescale as the finished report needs to make the council meeting on 14 July 2009 (one for your diaries!)

And the winning consultancy firm issssssssssss!

For those of you who don’t know. This is the staffing committee. If there is a restructure it has to go in front of councillors here. If your restructure goes there it does not mean the end of consultation. Councillors want to know early if there are going to be any redundancies, so a restructure may have to report back to this committee.

I always advise staff if their jobs are going to this committee they should attend to witness the discussion.

Last night our members working in Registrars came to the meeting to witness a discussion on their restructure. They were clearly disappointed as there was no discussion/questions about their restructure. However they were pleased to hear agreement for an extension to the consultation. After the meeting my colleague and I gave a de-briefing to our members on how committee works and the consultation process, which they all felt was useful.

Future Shape – Message to all staff

At the time of producing this flyer the Trade Unions have no idea what sort of recommendations will be in the report.

Our new Chief Executive has been providing staff with regular updates on Future Shape, recently he wrote:

“there is an emerging theme that all providers in the borough need to be working as ‘one public service’ so that we can better serve our residents.  Thinking through what this means and how we might achieve it seems to me to be crucial to not just the Future Shape Project but actually how the council will operate in the future.”

Whilst no one can predict what Council services will look like it is clear that services will not stay the same. In some cases staff may find themselves working for another organisation. For others it may be working more closely with other public services in Barnet e.g. Primary Care Trust, Barnet College This is why we need you to be discussing this in your team meetings and asking questions about what it could mean.

Future Shape cannot be separated from the Government’s response to the global collapse of the financial sector. It is already  well documented that Public Services are facing £ Billions in cuts over the next five years. It is a concern for all of us as to what this will mean for services and jobs in Barnet.

It is clear from members attending our Trade Union surgeries that staff are sceptical about Future Shape, viewing it as just another ‘privatisation model’. The Trade Unions understand these concerns and have repeatedly expressed them both to the Leader, Chief Executive and Councillors. The exclusion of the Trade Unions from the Seven Future Shape groups was a mistake. If major change is coming, it is vital that we are directly involved from the beginning of the process and throughout and not just at the end.

Locally we have many examples of ill-thought out proposals resulting in staff being privatised only for the service to fail in quality & savings. The Trade Unions are keen that mistakes of the past are not just acknowledged but inform our future relations through Commissioning/Procurement and Contract monitoring.

We are looking to see greater collaboration with our Employer after Future Shape Cabinet Committee. The Trade Unions need to be included in the detailed work on the Future for Services and that includes YOU the staff across all levels of the services.

On Monday 6 July it is important you are there in person with your work colleagues to witness your future both as a member of staff and the services you provide.

We are organising a Mass lobby of the

Barnet Council Sheltered Housing residents were clearly not convinced by the arguments put forward at the Cabinet Committeee last night.

To listen to residents click on the links below