Our Three Political Leaders speak on One Barnet

As this motion concerns all of the council workforce and in the interest of transparency and fairness I asked all of the Leaders of all three political party’s to send me a copy of their speeches which I said I would share with our members.

Here are three excerpts from their speeches

“What really concerns me is that no-one in the Conservative Group seems to be taking any notice of the warnings about these risks. Very few have attended any briefings by the independent and well regarded APSE, and most tellingly, that includes the very people responsible for the stewardship of One Barnet – the Leader of the Council, the Deputy Leader and Cllr Rams. They are so set on Plan A that they just are not listening.”

Madam Mayor this Administration is wasting millions of pounds of council tax payers money chasing an illusion driven by dogma. There is not one shred of evidence that any of it is going to work. The collateral damage to staff, services and reputation of the Council will be irreparable. The sooner we put a stop to it the better”

Local Authorities are obliged by law to “make arrangements to secure continuous improvement in the way in which its functions are exercised, having regard to a combination of economy, efficiency and effectiveness”. This is the duty of best value established by the Local Government Act 1999. Whilst it has been amended over the years it is still a fundamental requirement of local government decision making.  When applied to procurement decisions it can and should be, interpreted as a duty to ensure that preferred delivery arrangements are demonstrably the ones which represent the best use of resources.

If you have any questions or concerns with regards the report please do not hesitate to contact me.

“The company has recorded chronic losses in every year of trading and has failed to do what its creators promised – namely save any significant public money. Instead it squandered cash on a computer system that still isn’t working properly and continues to overcharge Somerset County Council and other “partners” for so-called services.

Somerset Council has now caved in to FoI requests and published the bids:

“BT came in almost £34 million cheaper than IBM on the standard bid – and very nearly £6 million cheaper on the “variant” bid – the projected cost of the grandiose extras the customer (Alan Jones) fancied. Capita’s approach was to pitch ridiculously high, like a builder who doesn’t really want the work at all. But the fascinating thing about this table of statistics is the IBM tactic. There is no difference whatsoever between their standard and variant bids. In other words IBM seemed to be prepared to keep the price the same whatever nutty bolt-on extras the customer wanted. Jones had asked for an “iconic” HQ for South West One, for example, to be built in Taunton. Needless to say IBM never provided it. They were promising the moon for the same price as an ordinary product.”

You can read his full article here

Our Barnet One Barnet special Edition out now

Our Barnet newspaper is out a One Barnet special edition

One Barnet Outsourcing …..it’s never too late to say no!

Question: “Can a Council which has gone so far down the road of privatisation decide not to award the contract to the private sector companies?”

Answer: “Yes they can as long as they have sound reasons to do so.”

Lets look at Edinburgh Council who had launched a mass privatisation programme and at the eleventh hour voted to keep services in house. In the minutes of their Council Meeting on 19 January 2012 they decided the following:

3) To further note that an internal improvement plan had been developed which had the potential to deliver significant improvements and savings to in-house service delivery and to agree:

To view the full minutes of the meeting click http://www.barnetunison.me.uk/sites/default/files/Edinburgh%20Council%205.2_Minute_190112.pdf

There it is, if the business case is not there then the Council can retain its in-house services.

Come along to the ‘Barnet Council Not For Sale Conference’ on Saturday 7 July at 12- 3 pm Greek Cypriot Centre, 2 Britannia Road North Finchley,London, N12 9RU to hear a speaker from Edinburgh tell their story.

Last night the Customers of Brunswick Ward delivered a massive swing away from the policies of One Barnet Commissioning Council.

This massive swing follows on from previous electoral swings from Customers in East Finchley By Election and across the whole of the borough with the GLA results.

We work in a political environment and at times the landscape can change radically which is another reason why One Barnet works against Local democracy. By that I mean that in 2014 (which is in 668 days. 19 hours….43 minutes…0 seconds!) another political party may win the election on a Manifesto opposing One Barnet yet find themselves locked in 10 year contract which the electorate had rejected.

As our members know UNISON recently tried to engage with senior officers of the Council about the One Barnet Commissioning programme. This offer was rejected, twice now.

UNISON has now begun a series of briefings for councillors.

UNISON has now begun a series of briefings for members.

Two briefings next week on Thursday 7 June between 12 – 2

UNISON has now begun a series of briefings for residents.

Barnet Alliance for Public Services delivered over 10,000 leaflets to residents over the last two weeks. As more and more residents find out about the scope and scale of One Barnet they are volunteering to help.

Update on One Barnet redundancies in NSL & RR Donnelley 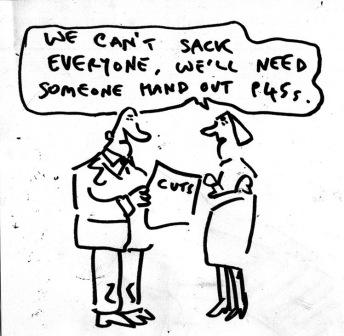 Last week I attended a number of 1:1 meetings with former council workers who have been transferred to NSL and the subcontractor RR Donnelley. The ‘one barnet redundancy’ clock is ticking, it is apparent there are little or no realistic opportunities for redeployment for them. NSL have provided our members with details of jobs with NSL in towns and cities all across the UK none of which are appropriate or realsistic options. I know that staff are being told in briefings that ‘outsourcing’ need not be a negative experience, in fact there could be real opportunities for career development! I don’t know who writes this script but I have yet to find a member who believes that ‘outsourcing’ is an opportunity for career development! I think my members facing redundancy at the end of this month would have much stronger words to describe how they feel they have been treated.

One Barnet the ‘Graph of Doom!’

“Barnet, once dubbed “easyCouncil”, is known for its enthusiastic embrace of service outsourcing. But the Graph of Doom is quite separate. Irrespective of savings planned under the One Barnet transformation strategy, the slide demonstrates that demographic change – more children, more older people – is going to soak up every penny the authority has.”

“The graph should not be taken too literally: by making no provision for Barnet&apos;s anticipated rise in income through regeneration schemes, for instance, it overstates the bleakness of the outlook.”

Council workers may remember this Barnet Council youtube video published just before consultation on the Council Budget began. The video did paint a stark picture that the Council will ‘run out of money’ the video portrayed this scenario as inevitable and it is being used to justify the need to outsource council services. So there we have it, councillors and residents and staff are being bombarded with “we are all doomed message”

However a local Blogger Mr Reasonable (and he really is very reasonable), quickly spotted the flaws in this presentation, take a look at what he had to say back 1 October 2011 here

M 1% drop in income collection could expose the council to a loss of over £2.2 million in council tax collection just over £1.1 million in business rates.

M a loss of 1% in Council Tax subsidy would equate to £2.6million. Currently Barnet performs in the top six in London at maximising the reclaim from the DWP

M failure council to optimise its income could potentially result in unplanned future increases in council tax as result of non collection.

M Failure to maximise the council tax base due to updates not being done in an accurate or timely fashion, discount and exemption entitlements not being effectively policed

M Any removal of key checks and balances, as suggested by the consultant’s report, will inevitably result in an increase in errors and deterioration in the detection and prevention of fraud.