Barnet UNISON in partnership with Barnet Alliance for Public Services and supported by the TUC are hosting a conference on the mass privatisation of Barnet council services this Saturday 7 July 12- 3 pm at the Greek Cypriot Centre, Britannia Road, North Finchley, London N12 9RU

The Council is attempting to become a Commissioning Council whereby it no longer delivers council services. In the last few months Barnet Council has already transferred the following staff and services out of the council to new employers

By the end of May 2013 up to 70% of the council workforce will no longer be working for the Council.

The aim of the conference is to provide information about the scale of risk to the council tax payers of Barnet. The conference will be in two parts.

Part One speakers include

Andy Mudd from the well-respected local government research body the Association for Public Service Excellence (APSE) published a report warning that over the past few years those at the north London Council involved in the awarding and managing of contracts to private contractors, have often ignored both council guidelines and UK competition law.

John Dix resident, one of the infamous Barnet Bloggers recently reported the Council has agreed another £10million be allocated to consultants to deliver the outsourcing One Barnet Programme

The second part of the meeting will include speakers from Aberdeen UNISON, and Edinburgh UNISON. Both of these councils recently decided not to go ahead with outsourcing after taking part in lengthy procurement discussions with a number of private sector contractors. A speaker from Sefton UNISON will talk about why Sefton Council decided to terminate their contract early with Capita Symonds. Capita Symonds is one of the Bidders for one the One Barnet projects.

John Burgess, Branch Secretary UNISON said “We are continuing to seek a meeting with councillors in particular the members of the Cabinet Committee regarding our concerns about the One Barnet Programme.  We know from experience that once residents are made aware of One Barnet they are very concerned about the implications. This conference is just one part of a widespread community campaign to bring public scrutiny to the One Barnet experiment.”

One Barnet the ‘Graph of Doom!’

“Barnet, once dubbed “easyCouncil”, is known for its enthusiastic embrace of service outsourcing. But the Graph of Doom is quite separate. Irrespective of savings planned under the One Barnet transformation strategy, the slide demonstrates that demographic change – more children, more older people – is going to soak up every penny the authority has.”

“The graph should not be taken too literally: by making no provision for Barnet&apos;s anticipated rise in income through regeneration schemes, for instance, it overstates the bleakness of the outlook.”

Council workers may remember this Barnet Council youtube video published just before consultation on the Council Budget began. The video did paint a stark picture that the Council will ‘run out of money’ the video portrayed this scenario as inevitable and it is being used to justify the need to outsource council services. So there we have it, councillors and residents and staff are being bombarded with “we are all doomed message”

However a local Blogger Mr Reasonable (and he really is very reasonable), quickly spotted the flaws in this presentation, take a look at what he had to say back 1 October 2011 here

Barnet Council response to the UNISON report on Revenues and Benefits 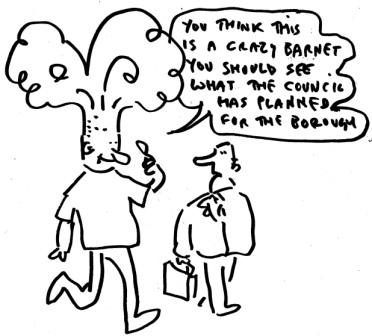 UNISON responded the restrucure to Revenues and Benefits by producing a detailed 13 page report including detailed evidence.

You can find our Executive Summary here

You can find our detailed report here

You can find our supporting evidence here

You can read the Council response here

To say it is disappointing woudl be an understatement. It is never easy to encourage staff, residents and the public to engage in consultation because many beleive the decisions have already been agreed. This is a very dangerous position to take and undermines local democracy.

If the Council abandon the restructure, they can make a saving of three consultants immediately, which we estimate would produce a total saving of £500k in 12 months. UNISON is prepared to offer the use of an expert consultant free of charge to work with the existing senior management team to produce a sustainable alternative structure for this service before outsourcing.”

We were in fact offering two savings for the Barnet council tax payer not one. The first saving was to terminate the contracts of the consultants. It is difficult to understand the business case for the continued use of consultants in Revenues & Benefits as they have given the task of making the restructure (they proposed) work to the council employed management team.

The second saving to the Barnet council tax payer was to provide the FREE use of a consultant to produce a sustainable alternative structure for this service before outsourcing.

Dear Mr.Burgess
Thank you for your e mail. I am confident that this matter has been well handled by the department
I see no need for a public inquiry.
Have asked Rick Mason to respond to your specific questions
Regards
Melvin Cohen

“What is going on in Libraries in Barnet?”

It has always fascinated me how strong the feelings are in the community for Libraries. The Strategic Review which is currently being carried out finishes at the end of November.

“How many Libraries are there in Barnet?”

The staff working in the Library Service are obviously providing an excellent service.

I understand that over 3,000 people have signed a petition saying “We the Undersigned, are totally opposed to the closure, sell off or downgrading of the Library service in the London Borough of Barnet…..”

It is my understanding that the Review has not made any recommendations to close, sell off or down grade the Library Service…….not yet anyway.

Whilst I do not know what the Strategic Review will recommend, I do think that in light of the economic climate and the Future Shape Policy of privatising services that there is a good chance we could see proposals which seek to privatise, cut or down grade the Library Service.

If I was working in the Library Service I would take comfort that residents are behind you and by signing the petition are responding to the consultation.

ALL Barnet UNISON members, their family and friends  can sign the petition online here

We have already had a week of the reporting in the news about massive cuts to public services post the Comprehensive Spending Review (CSR).

The impact of the CSR is going to impact on all Barnet staff directly and indirectly. If the current budget proposals are implemented there are going to be serious cuts to social care services. Children’s Services and in particular Youth & Connexions services will be devastated.

Future savings through the mass privatisation of council services are also included in the Budget proposals although no evidence of how these figures were reached,

If you can leaflet your street with flyers advertising the Lobby email contatcus@barnetunison.org.uk or ring 0208 359 2088.

We are asking everyone who us coming to bring a pack or two of Sparklers it is close to Bonfire Night.

We had a successful lobby last month and a colleague (Kumudu Dias made a short video which you can view here ).

Wrap up well, it is likely to be cold and wet but we will have plenty of things in place to keep you all warm and in good spirits

“4.3 The Catalyst arbitration, reported to Cabinet Resources Committee on 19 October, resulted in an additional cost estimated at £7m, which has had a significant impact on the earmarked risk reserve which now stands at £11.4m. The outcome of Icelandic Bank litigation remains the single most important financial risk facing the Council. The latest position is that hearings in the Icelandic courts are not likely to take place before January 2011. Authorities affected are continuing to work with the Local Government Association to achieve the best possible outcome. Regular progress reports are provided to the Cabinet Resources Committee.”

The above is a quote from the Cabinet Report which you can read online here.

Staff briefings are underway across all Directorates. Some Directorate are taking a bigger hit than others, this is in part due to grant funding reductions.

First I think it is important to recognise that the budget process is starting a lot earlier than usual, in the past we have not seen any proposals until early January.

The report does not clearly identify individual posts but it is clear that in the worst case scenario 430 Full Time Equivalent (FTE) posts could be deleted by 31 March 2011.

At some stage the Council will start consultation with Barnet residents, now is our opportunity for staff and the Trade Unions to ‘get involved’ in the process.

A number of UNISON meetings are taking place. Please make time to attend.

Call this an Options Appraisal?

Barnet Council has enlisted the support of consultants to deliver easyCouncil.

This report by iMPOWER is the latest of a long line of reports which surprise surprise promotes privatisation!

Last night we had some great speakers all very different.

Shirley told the story of the Save the Whittington Hospital Coalition. Against the odds they began a campaign in the community which grew and grew. 17,000 signatures on a petition to save the A&E. Now that is a challenge.

But signing a petition is not what helped win. By taking the petition into the community they had to speak to residents, so when they needed the support of residents for the march. The residents were already ready and willing to support. As she said residents can’t help if they don’t know what is going on!

I have heard John speak on the NHS before and he has lost none of his fire and enthusiasm for the battle to defend the NHS. John spoke about the dangers of the White Paper which could see the end of the NHS by 2013 if communities don’t rise up to oppose these attacks. He exposed the waste of public money, the lack of accountability in the White Paper proposals.

Nick got straight to the point that everyone understands. Public Sector workers are under attack, we have to stand up to defend ourselves. Trade Unions need to build alliances with staff and residents. It is not just staff who will face the pain of these attacks, it is everyone using public services. The Academies is a classic example of what this government is trying to do. Academies are seeking to break up state education and despite claims to the contrary, this policy will see the return of the ‘have and have nots!”

Ken reminded the meeting about how the country collectively responded after the Second World War. The country was bankrupt with debts far higher than we face now. Back then we owned Gas, Water, Electricity, Coal, Steel, Transport (Railway, Buses). Yet in spite of the financial crisis, the government created the 8th Wonder of the World otherwise known as the NHS. What an achievement. What vision.

Ken made it clear this was defining point in our history. The Government were embarking on a clear strategy to demolish public services and it is our duty to respond.

Their vision for public services is not our vision.

First task of the alliance planning meeting next week is to organise a public march across the borough.

If you want to help out, the meeting is being held here