Robot Wars: Barnet Libraries on the Eve of Destruction 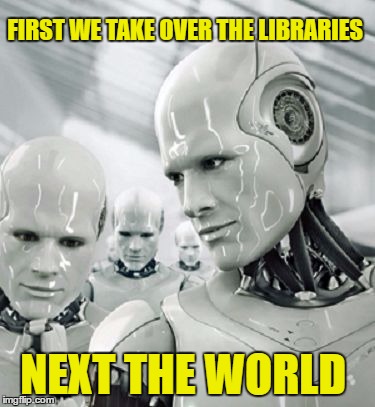 What was once one of the finest public Library Services in the UK is about to undergo a transformation that will see it left in ruins. In 2002 Barnet won a Beacon Council award for libraries as a community resource, but since then successive restructures have seen staff numbers and service points cut. The decline will reach an all-time low in April 2017 when the newly restructured Library Service comes into operation.

In April the Library workforce will be reduced by almost half. The Council alleges that their skills, knowledge and experience can be replaced by volunteers and self-service machines.

Four Libraries will be handed over to charities and resident groups to be opened for only fifteen hours each a week.  The people of Mill Hill, South Friern, East Barnet and Childs Hill will lose direct access to a professional library service.

The Council will give these partnership libraries between £352,000 and £384,000 in grants for the first 3 years, money that would be better spent providing a service staffed and run by librarians and other real library workers.

The remaining Council-run libraries will have staff present only for a few hours on most days. Some days will be completely unstaffed. Under 15-years olds not accompanied by an adult will be unable to enter the libraries during these hours.

The Council seems unconcerned how this will affect the public, although aware that;

“The reduction in staffed opening hours will mean less support available in the library to get advice, information and to utilise the resources in the library. This will have the biggest impact on those who may require support to make best use of services at static library sites or are less able, or confident at using libraries without library staff support”

The Council claims that CCTV monitored from a control centre in Cardiff will be sufficient to maintain the safety and security of people using the Libraries. Barnet UNISON disagreed, and continues to disagree, with the Council, citing incidents of anti-social behaviour, physical and verbal abuse and theft that have occurred in libraries, the number of which would be far higher if library staff had not been on site to prevent them.  Barnet UNISON remains unconvinced that the emergency response systems the Council plans for unstaffed hours will be sufficient.

Libraries are also to be reduced in size by up to 90%, as space is hived off to be offered for rent to commercial and community groups. This will leave inadequate study, computer and events space in most libraries. With only a few days to go before the restructure the Council has confirmed only one organisation interested in renting.  Since 2014, when this plan was first announced, Barnet UNISON has been pointing out that the Council’s estimated rental income of £546,000 by 2019/20 is very unlikely to be met

The Council claims it is being forced into reducing Library staff numbers, space and direct control of all libraries because of the need to save £1.6 million from the Libraries Budget by 2020. But the Council allocated over £6.5 million to implement the changes. In December the Council made known it was allocating over £14 million for “library procurements”. On the 8th December 2016 Barnet UNISON asked the Council a number of questions regarding this “procurement” spend. Because the Council did not answer our questions in full we resubmitted them on the 16th January 2017 and on the 14th February 2017. We still await a meaningful response

This is a lot of money to be spent on reducing the assets, efficiency, accessibility and safety of a service.

Barnet UNISON and the Save Barnet Library Campaigns have argued with the Council for over two and a half years that a machine and volunteer dependant Library Service would lead to a decline. The Council’s own consultations with the public found little if any support for their plan.  But the Council has consistently failed to address these arguments instead repeating the mantra that no libraries in Barnet were being closed and that opening hours were being extended. But when the new Library structure is implemented in April opening hours will not be any longer than at present.  The promised extended opening hours are now being postponed until the autumn. Only five of the Council-run libraries will be open while building work to reduce library space is carried out and the four “partnership” Libraries will stagger their hours between them.

In April the people of Barnet will find their library service much reduced. It is likely that many current and potential library users, particularly children, will find Barnet Libraries hard to access, information and advice difficult to come by, containing very little study space and the range of stock and services a shadow of what was once on offer.  This is likely to lead to a decline in use and an excuse by the Council to close Libraries

Our members working in libraries will continue as they have done in the past to try and provide the best service they can. But their low numbers, limited staffed opening hours and lack of space will be insurmountable barriers. Barnet UNISON will strongly oppose any attempts by the Council to place blame on library staff for the decline in the Service and any attempt to shift responsibility for any harm resulting from unstaffed opening hours.

Our members will be the first in line to face the frustration of the public with the restructured Library Service, but those responsible are the present ruling administration of the Council. Public dissatisfaction with the Library Service is likely to grow and may well have an influence on how Barnet residents vote in the next local elections.

Barnet UNISON will continue to campaign for a restoration of the Library Service. The people of Barnet need and deserve a professional library service staffed by real library workers.

Barnet UNISON call on the Council to stop the restructure and work constructively with those people working in and using libraries and with the wider community to build a Library Service that can once again rightly claim to be one of the best in the UK.

Further details on the Library changes and the Barnet UNISON’s campaign to stop it can be found on.