Four Days That Shook One Barnet 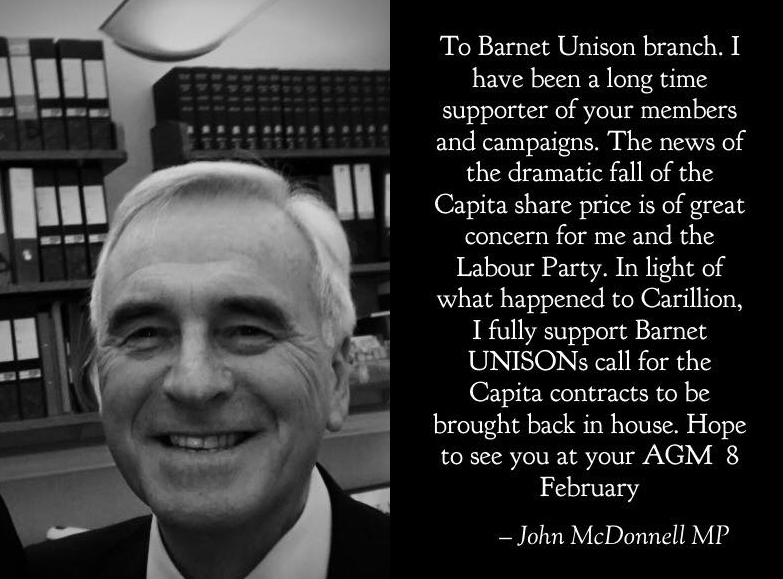 What a week it has been.

In August 2013 Barnet Council decided to “get into bed” with Capita, when they signed the contracts, Capita Share price was 959.

Back in 2010 another contractor (Connaught’s) went into liquidation. They provided the Council Housing repair service. Our members were sacked by a telephone conference call.

As a result of that experience, when the Council started “courting” the private sector to run our services, Barnet UNISON warned the Council about the risk of contractor failure.

The response to our feedback was, “don’t worry”, “Capita is a top FTSE 100 company”, hence there is no risk of the contractor failure.

Earlier this year Carillion collapsed and went into administration.

To the wider public it was a surprise and a shock.

However, as more details emerge about the fall of Carillion, more questions are being asked.

“For those already thinking this sounds a bit like Carillion – you are right. A gaping pension deficit, departing CEO, shrinking cash flow and over-reliance on intangible “goodwill” in it’s accounts – signed off by KPMG.

Capita’s profit warning caps a 24 month slide which saw the UK’s largest outsourcing company tumble out of the FTSE 100 index, its share price losing 80 per cent of its value since January 2016, falling from £11.60 to £2.01 today.

Council notes the collapse of the giant outsourcing firm Carillion earlier this month following financial problems, a number of profit warnings, the departure of its Chief Executive and a drastic plunge in its share price. Council notes the uncertainty and concern this causes for thousands of Carillion’s workers, the small businesses in its supply chain, the projects it was contracted to deliver, and the public who use the services it was contracted to provide.

Council notes LB Barnet’s use of mass outsourcing contracts to provide critical back office, regulatory and other services, and therefore requests that the Policy & Resources Committee receives a report on what contingency plans are in place should anything similar happen to outsourced services in Barnet.

You can listen to the debate by going to the web site http://bit.ly/2EycNU5

The following motion was agreed. This is astonishing in itself as it is extremely rare for all political parties to agree on a motion.

The contingency plans for insourcing will be submitted to Performance and Contract Management Committee, Tuesday 27th February, 2018 7.00 pm.

This is a public meeting

“Flying a kite to cause trouble” “nothing to worry about Capita”

This debate took place before anyone was aware that Capita were about to issue a Profit notice.

Capita’s new Chief Executive stated: “Today, Capita is too complex,” he said. “It is driven by a short-term focus and lacks operational discipline and financial flexibility. [It] needs to change its approach. Cost savings and non-core disposals alone will not be enough. We have also taken the significant decision to suspend the dividend and seek equity.”

The next Carillion? Shares in outsourcing firm Capita plunged 40% after profit warning.

Outsourcing giant Capita announced the suspension of its dividend as part of a transformation plan this morning – and shares duly plunged by more than 40 per cent.

Contingency plans being made for Barnet’s contracts with Capita

In the debate in the House of Commons today, a Labour MP referred to Barnet Council having a contingency plan.

The company’s value has more than halved since a profit warning earlier this week, falling a further 13% on Thursday. Competitors including Interserve, Mitie and Serco also saw their shares slide.

Labour MP Rachel Reeves asked about the serious financial concerns at Capita, after £1bn was wiped off the company’s value following a suspension of dividends and £700m rights issue yesterday. The firm’s shares have now plunged by almost 50 per cent.

Immediately after the announcement, Barnet Council – dubbed “easyCouncil” for its extreme reliance on outsourcing (it has more than half a billion pounds worth of contracts with Capita) – put contingency plans in place to examine how it would handle the fallout should Capita fail.

“The news that Capita stocks have nosedived places further pressure on the system of outsourcing public services and will require a significant review. We also referred the security of the PIP assessment contract, which currently rests with Capita, to the Auditor General for further inquiries.”