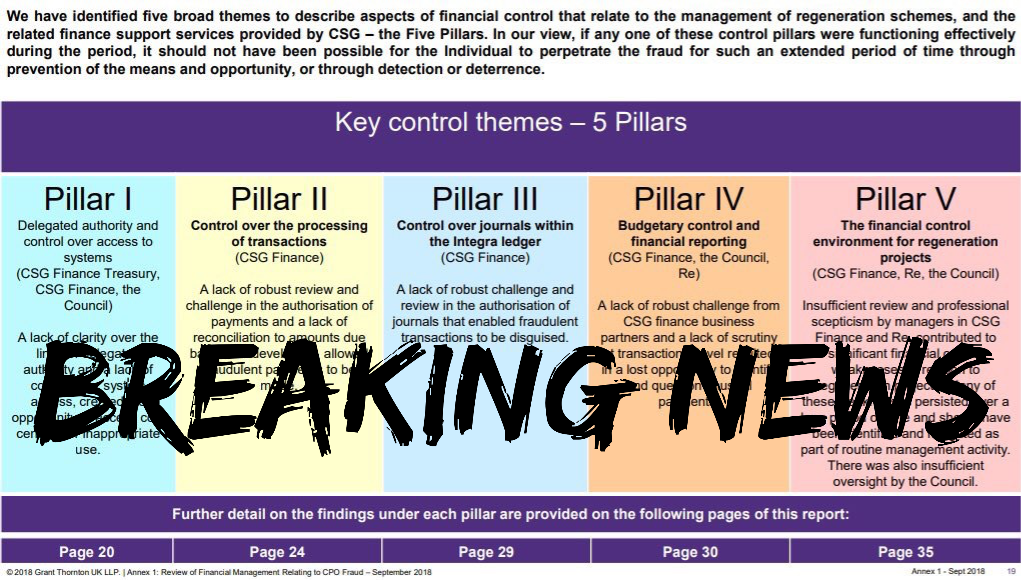 Grant Thornton was commissioned by the London Borough of Barnet (the Council) to provide support in its response to the discovery of an alleged fraud.

The GT review looked the two Capita contracts below.

Contract 1: The London Borough of Barnet and Capita (BRDS) Limited relating to the provision of Development and Regulatory Services signed 5th August 2013 “DRS”

The combined worth of both contracts over a 10 year period £424 million.

“The individual is believed to have committed a fraud to a detected value of £2,063,972 by directing CPO payments to personal bank accounts.”

“Our view of both contracts has identified a number of significant weaknesses which may have resulted in contractual breaches. We have identified and reported what we believe are fundamental weaknesses in budgetary control and financial accounting.”

“We note both the DRS contract and the CSG contract detail consequences for the Service Provider of Persistent Breach”.

“Lack of effective review of controls over financial ledgers.”

“The monthly and annual budgetary control process provided by CSG Finance for capital projects in Re lack sufficient rigour to challenge unusual transactions and journal entries.”

The GT review goes on to develop five broad themes and referred as control ‘Pillars’. GT had this to say about their ‘Five Pillars’

“In our view, if any one of these controls Pillars was functioning effectively at any point during the period (July 2016 to December 2017) on question it should not have bene possible for the individual to perpetrate the fraud…”

John McDonnell Shadow Chancellor said: “The Grant Thornton (GT) review of the two Capita contracts in Barnet provides yet more evidence of the folly of privatisation of public services. When I read “significant financial control weaknesses…“poor accounting controls” in the GT review it summed up what I have been saying about the current Tory government. They have failed our economy by rewarding their friends in big business, leaving our communities and public services to suffer at the hands their brutal austerity policies. I want to send a personal message of solidarity from the Labour Party Conference to Barnet UNISON and the residents who have fought side by side against a right wing mass outsourcing ideology. I fully support your campaign to #KickOutCapita from Barnet and bring services back in-house.”

Professor Dexter Whitfield who recently published a joint review entitled “’Future Shape’ ‘easyCouncil‘, ‘One Barnet’= Failure” with Barnet UNISON on both Capita contracts had this to say:

“The Grant Thornton audit reveals very serious flaws and inadequate operational practice in both the Capita regeneration and back office services contracts. The fact that it took a fraud case to reveal the full nature and scope of these flaws is a damming indictment of Capita and Barnet Councils contract management and monitoring. Furthermore, implementation of the remedial action plan may address the current inadequacies but gives little reassurance that there are no other serious flaws that remain to be exposed. The audit provides further significant evidence for the Council’s review of both contracts and a decision to terminate the Capita contracts and return to in-house provision as a matter of urgency.”

“I am shocked but not surprised at the content of the GT review of both Capita contracts. Barnet UNISON predicted that service quality would suffer once the services were privatised however there is little comfort in saying “we told you so” for the hundreds of local jobs in Barnet that were lost as a direct result of Capita winning the contracts. What is surprising, is that it took a fraud, to deliver the forensic scrutiny we have long demanded. Over the past five years frontline in-house services have endured vicious cuts whilst the two Capita contracts have drained badly needed public money, in order to satisfy the needs of Capita shareholders who put profit before quality services to residents. When Capita issued a dramatic profit warning on 31 January 2018, why did the Council not begin discussions to bring services back in-house. It seems clear from the GT review that even at an early stage there were serious endemic financial and budgetary issues. The Council is currently preparing a review of both Capita contracts. It is my view that in light of the GT review, it is untenable that the Council could even consider allowing Capita to run any of their services again. The relationship between the Council and Capita is in my opinion irreversibly broken, it’s over, and now is the time to end it, no expensive divorce bill, Barnet Councils services, and residents have tolerated enough of the mass privatisation ideology. Never mind #Brexit it’s time for #Capzit”.

3. How can Barnet Council even think of allowing Capita to run our IT services after this?

5. Is this the end of Capita in Barnet – Grant Thornton’s report is a devastating critique of Capita’s dismal performance.