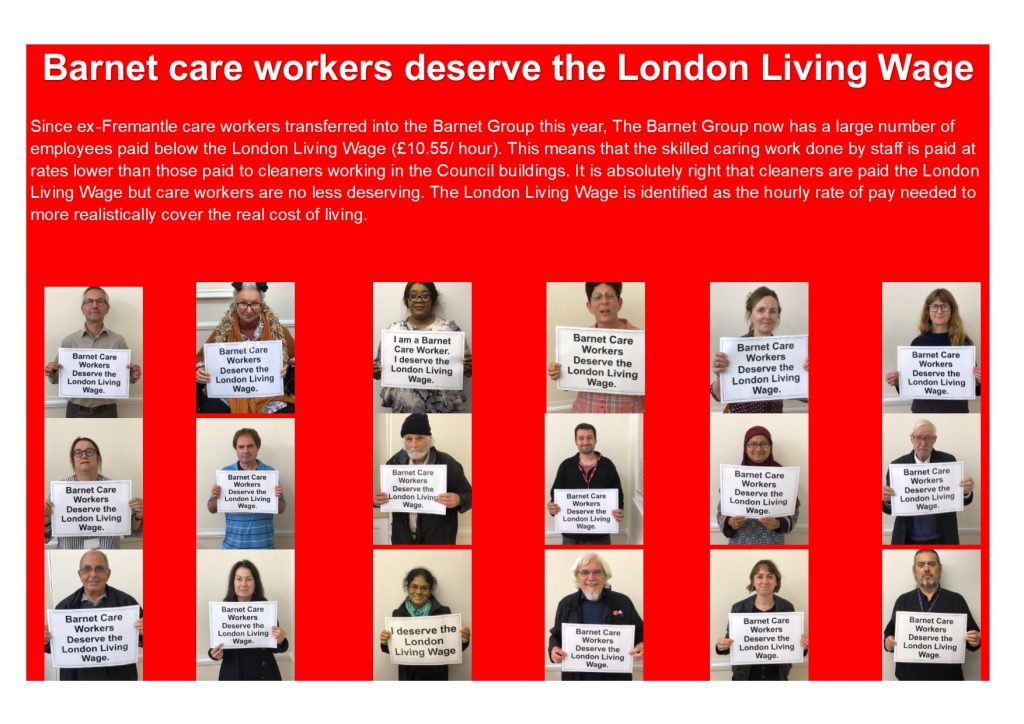 With respect to the decision made at the last P&R Committee, Council officers have, at best, not complied with the request and at worst have misled the Committee.

The Officers are required to investigate the actual costs associated with implementing the London Living Wage for the ex-Fremantle workers.

Over the past decade one thing Barnet UNISON is in agreement with Barnet Council is that the London Living Wage is the lowest rate of pay for its staff and those working on outsourced contracts.

Within the Barnet Group the minimum rate of pay for staff in Barnet Homes, TBG Flex (The Barnet Group Flex) and Your Choice Barnet is the London Living Wage – including posts which become vacant within the ex-Fremantle homes.

After a settling in period for the TUPE Fremantle staff Barnet UNISON raised in discussions with the employer the issue of paying these staff the London Living Wage as the lowest level of pay. We believe these staff should be treated no differently to other staff working for Barnet Council or on its outsourced contracts.

Barnet UNISON notes the decision regarding a discussion about implementing the London Living Wage for Fremantle TUPE transferred staff to Your Choice Barnet at the Policy and Resources Committee 3rd October 2019 is recorded in the draft minutes as:

“Following discussion on the London Living Wage for Fremantle staff who had been TUPE transferred to Your Choice Barnet the Chairman agreed to an item on the feasibility being brought back to the next Committee. This would be included in the Business Planning report”

Any decision about changes to terms and conditions will need to be considered in the context of the overall pay and reward strategy for the Barnet Group, employment policies and legislation, the wider social care market and the council’s procurement rules.   It is not yet possible to quantify the level of risk associated as it is too early to form a conclusion about the application of the LLW to TUPE staff. However, officers in the Barnet Group supported by council colleagues where necessary will be working on this over the coming months and can provide further update to the committee in the future.

These two paragraphs responding to the Committee’s request in no way reflects the response Barnet UNISON or the care workers were expecting. We had expected a detailed report detailing the cost implications for implementing the London Living Wage. Instead this response kicks the question into the long grass.

This is absurd as all new vacancies in the ex-Fremantle homes are advertised as paying the London Living Wage as a minimum. These posts are open to existing Fremantle staff to apply for those posts. This means that incrementally at least some of these staff working in these homes will be all be employed on the London Living Wage. This fact is not even listed in the 2 paragraphs written by the officers. This means this risk is already a reality and yet it is not mentioned or evaluated. No turnover rates are mentioned. Is it ironic that a credible option for the ex-Fremantle staff to en masse resign from their posts and then to reapply for posts in the new homes which would have to be offered at the London Living Wage?

The report in no way reflects the request made of the Committee to the officers. A “feasibility” was requested not the “risks”. Furthermore the Councillors are asked to believe that the officers are incapable of quantifying the “level of risk” associated with “the application of the LLW to TUPE staff.”

Barnet UNISON can be of assistance to the officers and councillors in understanding some of the implications by revealing the inaccuracy of the sentence: “Some former Fremantle care workers […] may be being paid less than the London Living Wage”. (Our italics)

TUPE information from Fremantle in May/ June 2019 revealed that just under 300 staff were TUPE transferred. Of these, according to the figures given for the job titles and the rates of pay quoted for those job titles, some two thirds were listed as being paid below the London Living Wage. In total these were 222 staff. The largest group are the care workers which total some 143 workers and are nearly half of the ex-Fremantle workforce.

There is a risk in not paying the London Living Wage as this report demonstrates:

In the Care industry there is a national turnover rate of 38% for those working less than one year in the field (p.13). It shows that those who are paid more are less likely to leave their roles.

“Turnover at regulated services that were rated overall as either ‘outstanding’ or ‘good’, turnover was found to be lower (29.5%) than those rated as ‘requires improvement’ or ‘inadequate’ (32.2%). This trend remained consistent across each Key Line of Enquiry (KLOE) with an average difference of 2.7%. The largest difference in turnover was shown for the ‘Safe’ KLOE which had 3.4% lower turnover at providers rated positively.” (p.118)

Continuity is an important factor in delivering quality care and support to our most vulnerable residents. There are associated costs in constantly recruiting and inducting new members of staff. These can result in reputational and safeguarding costs.

Barnet UNISON strives to work with both the Council and quasi outsourced employers, such as the Barnet Group, in continuing to promote harmonious industrial relations and to provide a high level of service for our customers. This may, potentially, be put in jeopardy if the decision is not to value monetarily the important role that care workers perform.

These factors should be of importance to this Committee and to Councillors in general and should be taken more seriously than the response to the request from Council officer’s shows.