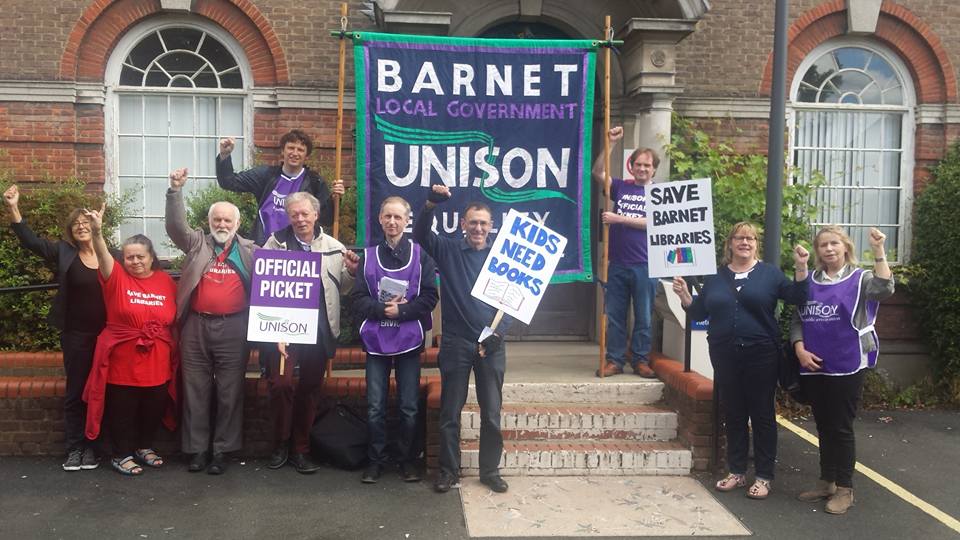 Barnet UNISON has called for industrial action in Barnet Libraries on the following dates:

This has led to:

Colleagues remaining in the Library Service after April face:

To end our dispute we have called on the Council to:

However the Council has so far refused to meaningfully negotiate, leading us to resort to industrial action.

The Council claims it is being forced into the Library changes by a need to cut £2,162 million from the Library Service budget by 2019/20. But it will spend over £7 million (and rising) in doing so.

If the Council were truly being forced into the Libraries cut by the need to save money, they would not have spent:

The Council has funds which it chose not to spend on providing the Library (and other) Services. Its Library plan is ideologically driven by a wish to divest itself of its responsibilities in its drive for privatisation.

Barnet UNISON and the Save Barnet Libraries Campaign have been resisting variants of the Council’s present plans for the Library Service since autumn 2014. In many other authorities Libraries, Library workers and Library users have suffered without any opposition. In Barnet we as Library workers, in alliance with other trade unionists and residents, have demonstrated, marched, leafleted, lobbied, used social media, organised petitions and taken industrial action. This has meant:

What You Must Do Next

The Library Restructure has not received its final approval from the Council.  This will be voted on in the General Functions Committee on the 6th of December.

The faults in the Library plan, long pointed out by UNISON, are becoming clearer to the public. To make the Council enter negotiations and to gain publicity for the Libraries issue you must strike. By not striking you will:

Further information on this will be sent out next week. The Branch should be able to see that no striker suffers harsh financial loss. Our last strike in June not only attracted messages of support but donations from trade unionists and campaigners across the country.

On the 5th of November join the National Demonstration for Libraries, Museums and Galleries (see attached)

If you are on Facebook please invite your friends and ask them to invite their friends to this event. Please leave comments or details of why you are going to this event.

Saturday 5th will be the first day of our renewed campaign to Save our Libraries.

If we fight we may not win, if we don’t then we will certainly lose.