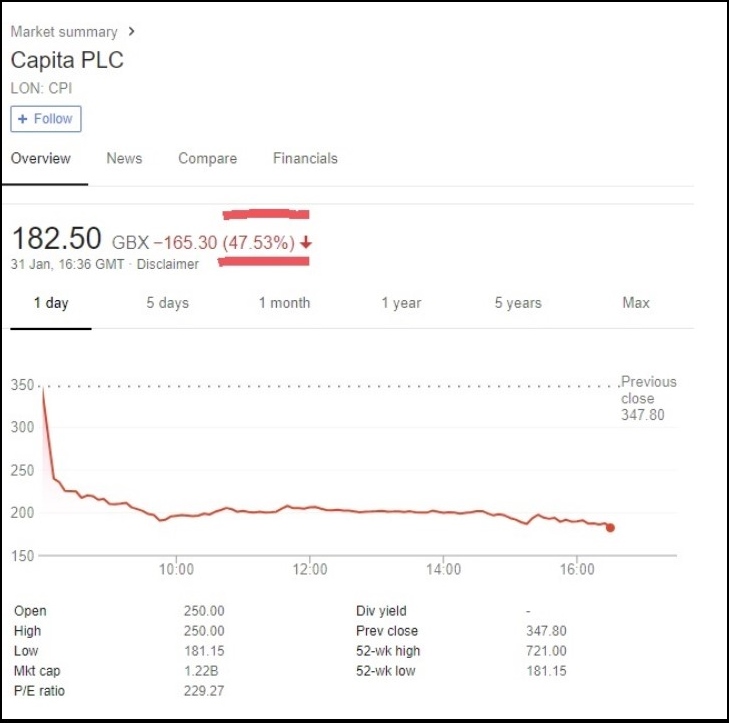 This morning Capita staff woke up to some scary headlines that the former FTSE 100 company was in serious trouble.

The next Carillion? Shares in outsourcing firm Capita plunged 40% after profit warning.

Outsourcing giant Capita announced the suspension of its dividend as part of a transformation plan this morning – and shares duly plunged by more than 40 per cent.

This news follows on from the recent collapse of Carillion only a couple of weeks ago. Already political commentators are making comparisons with Carillion and Capita.

In light of the much publicised stress and anxiety experienced by Carillion workers in the wake of the company’s downfall; Barnet UNISON has written to the Chief Executive seeking details of Barnet Council’s contingency plan in the event Capita may have to give up their contracts.

We know that whatever happens there is going to be a great deal of speculation and uncertainty for the staff and whilst UNISON has seen the email from Jon Lewis, Capita’s, new Chief Executive trying to stem anxieties of his 70,000 workforce, we know workers will be worried about their jobs.

Barnet UNISON is looking for a statement from the Council in the event that Capita are unable to continue to run the two Barnet contracts, that Council will initiate plans to transfer the staff back in-house.

Who can we trust?

Since the collapse of Carillion, more news has emerged as to how bad things really were for that company. Furthermore questions are being asked about the role of the external auditors KPMG more here https://www.insider.co.uk/news/watchdog-probe-kpmg-over-carillion-11931818

It has happened before in Barnet……

In 2010 Barnet Homes had commissioned Connaught’s to provide Council Housing Repairs service. Connaught’s went into liquidation. Our members were told they had lost their jobs over a message on a speaker phone. Months earlier Barnet UNISON had held talks with Barnet Homes Chief Executive as it was becoming increasing clear Connaught’s were in serious trouble. There was further problems when it became clear that there was missing pension contributions which needed to be picked up by Barnet Council.

“Once again the market shows that it is merciless when a company is in trouble. Carillion looks as if it is just the tip of the iceberg. The minute Carillion collapsed I immediately started to look more closely at Capita Share price. I noted that Capita share price had already dropped by around 66% in the last two years. Today seems to have shocked many experts. My concern is for the staff and the local services they provide for Barnet residents. I know from speaking to staff that they are worried and quite understandably cynical about any messages trying to play down what is happening to the company. After the debacle that our former Connaught members went through previously I want to ensure this time that Barnet UNISON does it utmost to try to allay members concerns about their future employment. My view is that this event is a watershed moment for Barnet Council. Please abandon your “love affair” with outsourcing and commence negotiations to return all services back to the Council.” John Burgess, Branch Secretary Barnet UNISON

1. “NHS England has said it is ‘holding Capita’s feet to the fire’ over poor performance, and GP leaders have called for the service to be taken back under NHS control.”

2. “No sensible public authority, whether council, NHS trust, or Whitehall department, would let a contract to a company over which hang as many question marks as hang over Capita.

Procurement chiefs and permanent secretaries should now be poring over their contracts with Capita and making contingency plans. Capita runs payroll in many councils and staff have to be paid, so immediate alternative arrangements should be in place. That costs money, which needs to be factored into the cost of this and future contracts.”

5. Thousands of court cases adjourned due to failures in interpreting services