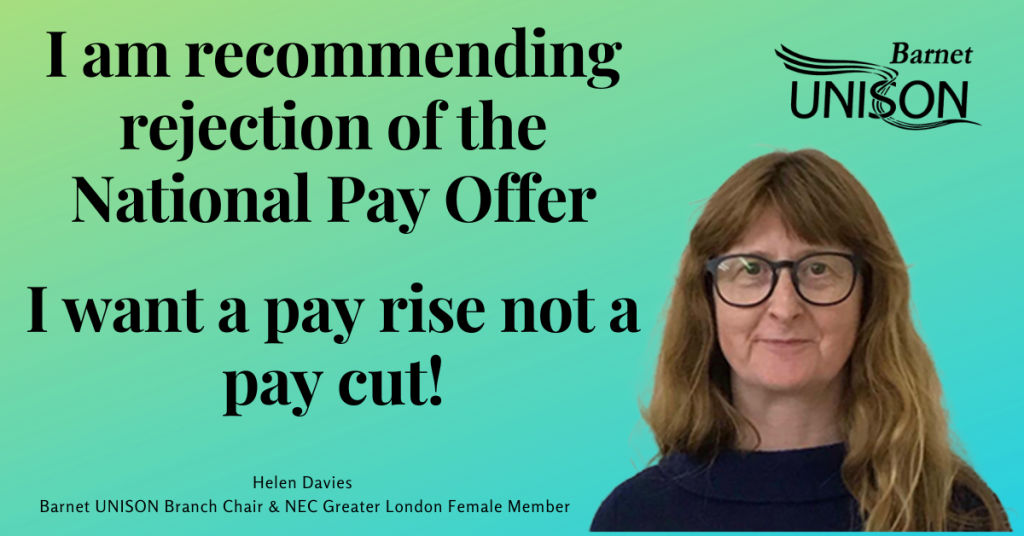 Barnet UNISON members were recently balloted on the National Pay offer as part of UNISON’s national consultation on pay for Council and School support staff.

Barnet UNISON reps had taken the decision to recommend that our members should reject the offer.

The response from our members has been dramatic and reflects the grassroots organisational strength of Barnet UNISON.

The results confirm that our members did listen to their rep’s view on the National Pay offer and voted overwhelmingly to reject the offer.

Barnet UNISON delivered a 55% turnout of members voting across our members working for Barnet Council and Barnet Schools.

We are pleased to report the following turnouts across some sections of our membership:

The message from Barnet UNISON members that they recognise the need for a National Pay Award which delivers a Pay Rise not a Pay Cut.

Barnet UNISON produced the largest number of REJECT votes of any UNISON branch in London.

Our results have been sent on to UNISON where all the votes across UNISON will be counted.

Please note Unite and GMB National Pay ballots are still live until into the middle of October.

Barnet UNISON will report back to our members once all three trade unions have decided what action needs to be taken.

In the meantime, Barnet UNISON is already in Pay & Grading negotiations which will have an impact on all our members working for the London Borough of Barnet. We will be providing updates on negotiations in due course.

Any questions or queries please leave a message on our voicemail on 0208 359 2088 or email contactus@barnetunison.org.uk